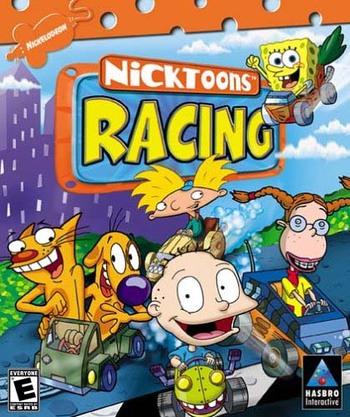 Only in 2000 would CatDog be featured more prominently than SpongeBob on any cover
Advertisement:

Nicktoons Racing was a 2000 Mascot Racer that was released on PC, Game Boy Color, PlayStation, Game Boy Advance, and as an Arcade Game. The plot is as follows: various Nickelodeon characters receive a mysterious invitation for a racing tournament, hosted by the enigmatic Mystery Rider. The prize for winning? The Krusty Krab Big Bun Award, which comes with a year's supply of Krabby Patties. The game features most of the Nicktoons that had been released at the time, with the exceptions of Doug, Rocko's Modern Life, Kablam, and Rocket Power.

The roster consists of the following shows and characters: