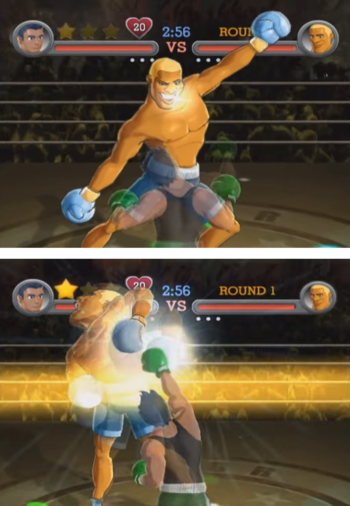 It's not uncommon for video game bosses to grab hold of the Villain Ball, just to make things easier for the player. Sometimes they'll use attacks that either tire them out or leave them open to counterattacks, sometimes they'll stock their battle arenas with weapons that can be used against them...

...and sometimes they'll completely let their guard down just to taunt you.

Enemy Posturing refers to any boss who takes time out of the battle to taunt you, laugh at you, strike a pose or wave to the crowd, leaving themselves defenseless in the process. In some cases, this will be the only time the boss is vulnerable, and the taunting is used to let the player know that it's time to attack. Otherwise, it's just to make the battle easier, and reward the player if they can react quickly enough.

Subtrope of Boss Vulnerability. See also Braggart Boss. Compare The Computer Shall Taunt You, Evil Gloating and Suicidal Overconfidence. Compare and Contrast I Shall Taunt You, when the enemy uses taunts to goad you into letting your guard down.