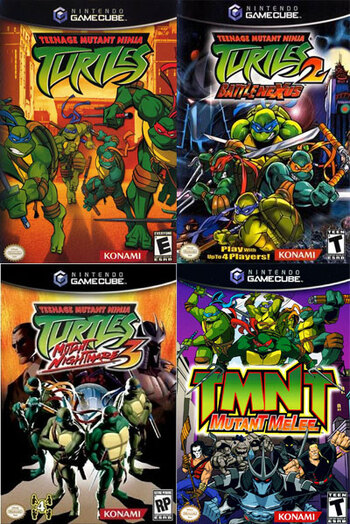 Leonardo: Remember, be ready for anything
Advertisement:

Several games were released to tie into the 2003 Teenage Mutant Ninja Turtles cartoon, all of them beat-em-up's released by Konami.

The first game, simply titled Teenage Mutant Ninja Turtles, was released in 2003 and adapts most of Season 1. The main gameplay loosely adapts the following season one episodes: "Things Change", "A Better Mouse Trap", "Attack of the Mousers", "Meet Casey Jones", "Nano", "Darkness on the Edge of Town", "The Way of Invisibility", the "Notes From the Underground" three-parter, and the "Return to New York" three-parter, as well as a level that is not derived from the animated series at all. Cutscenes used were directly lifted from the 2003 TV series, with some cutscenes being original for the game. The story consequently is a loose adaptation of the general plot of the first season; the Turtles slowly become involved in a conflict with the criminal Foot Clan led by the Shredder; the Turtles encounter his lieutenants like Hun and Baxter Stockman and contend with various oddities and foes across New York, culminating in a siege on the Shredder's skyscraper headquarters.

The player can play as either Leonardo, Donatello, Michelangelo or Raphael. Each turtle has his own unique set of levels to complete. There is a story mode for one or two players, and there is also a versus mode where two players can fight head to head. Unlockable characters are Spinter, Casey Jones (both of which can play in the story mode), Turtlebot, Hun, Shredder, Oroku Saki and Hamato Yoshi.

The game got two sequels, the first being Teenage Mutant Ninja Turtles 2: Battle Nexus in 2004, which adapted a vast majority of the show's second season. This time, up to four players can play as either the Turtles or the four unlockable characters, Splinter, Casey, Karai, and Canon Foreigner Slashuur. After the game re-adapts the final episodes of Season 1, the Turtles are sent into space and become involved in a galactic war between the Triceratons and the Federation, two warmongering alien races. When they finally return home, the Turtles learn some surprising truths about the Shredder and once again contend with the everyday adventures in New York, including a gang war, a trip to the future, further confrontations with the Shredder, and even a journey beyond their own dimension. Aside from the lengthy campaign, the game also features unlockable costumes, a tournament mode that also adapts the Season 2 finale, and a mode set in April O'Neil's antique shop Second Time Around, in which the player can unlock pieces of concept art, pieces of lore from the show, and even the original arcade game ported for a new generation of fans.

In 2005, two separate games based on the show were released; Teenage Mutant Ninja Turtles 3: Mutant Nightmare and Teenage Mutant Ninja Turtles: Mutant Melee. While Mutant Nightmare continued the trend of adapting a season of the show, this one adapting the third season, Mutant Melee is a fighting game that does not follow a narrative plot. These would be the final main games to be released based on the show.

Mutant Nightmare consists of four arcs based on several episodes of the third season. The first, "Space Invaders", adapts the half-eponymous arc from the show consisting of the "Space Invaders" and "Worlds Collide" three-parters, in which the Turtles work together with Professor Honeycutt and Traximus to fend off the Triceraton invasion of Earth. The second, "Bishop's Gambit", has the basic premise of the episode of the same name - in which the Turtles go to rescue Splinter from black ops agent John Bishop - albeit slightly expanded to include some elements from other episodes such as "Touch and Go". The third, "Exodus", adapts the episode "New Blood" and the "Exodus" two-parter, detailing the Turtles' final confrontations with the Shredder and Karai. Though the credits roll after completion of this stage, a fourth arc called "Nightmare" adapts the Ultimate Drako Simultaneous Arcs storyline in which the Turtles are flung across time and space by the resurgent Ultimate Drako.