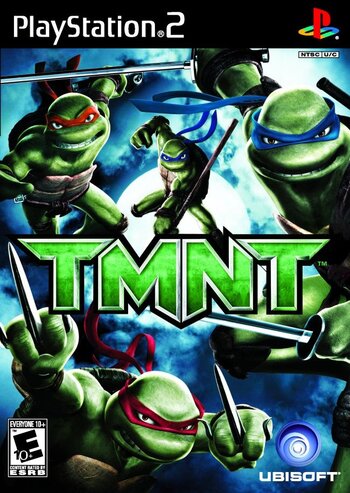 TMNT is a 2007 video game based on the animated film of the same name, developed by Ubisoft. There are three versions of the game:
Advertisement:

The most well known version is a 3D action adventure game for the Playstation 2, Nintendo GameCube, Nintendo Wii, Xbox 360, and PC (Versions for the Xbox and Playstation 3 were planned, but ended up cancelled). The voice actors of the Turtles would reprise their roles. Gameplay consisted of controlling one of the four Turtles and playing out the plot of the movie, and encouraging co-op. Though it wasn't developed by Konami, the gameplay harkens back to their console games based on the 2003 series.

Versions of the game were also developed for the Nintendo DS and Playstation Portable. Rather than being full 3D action games, these were developed as acrobatic platformers, with special gameplay quirks based on the consoles' unique functions.

Another version was made for the Game Boy Advance. This one was a Beat 'em Up game similar to the original arcade title and Turtles in Time by Konami. The people behind this game would eventually go on to create Scott Pilgrim vs. The World and Teenage Mutant Ninja Turtles: Shredder's Revenge.