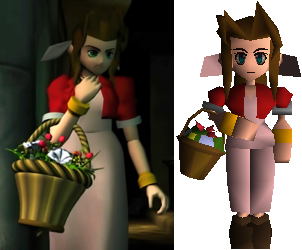 In the early days of the Video Game 3D Leap, Game Engines were not capable of rendering 3D models with the level of detail that they can today in real-time, and developers had no choice but to use extremely low-polygon models that only vaguely resembled the shapes of characters and objects in the game's world, in order for the games to still perform well.

One way around this was the concept of "pre-rendering", where higher-polygon 3D models were rendered once and used as still images. Sometimes the pre-rendered images could still be interacted with, and other times they only functioned as fancy backdrops. In both cases, this required the games to have a Fixed Camera, as a more dynamic camera would require more angles for the images to be rendered from, which would've largely defeated the point of pre-rendering them.

Pre-rendering wasn't limited to just in-game graphics, however, many games also pre-rendered their cutscenes, in order to improve the presentation of the story, and from that, players' investment in said story. In Licensed Games, cutscenes often took the form of (heavily-compressed) clips of the work they were licensed from. Not all pre-rendered cutscenes used 3D modeling, some took full advantage of the looser limitations and used fully-animated 2D cartoons, others even used live-action actors.

Pre-Rendered Cutscenes are also known as "Full Motion Videos" (or "FMVs" for short), though the term isn't widely used today, and is mostly used to refer to Live Action Cutscenes and Interactive Movies. See those pages for more detail.

As game engines got more powerful, pre-rendering saw a significant decline in use, though it is by no means gone entirely. Announcement trailers for new games are still often pre-rendered and feature no in-game footage at all, and some games still use pre-rendering for budget or presentation reasons. For technical reasons as well, playing a video is easy to process and doesn't take up much storage bandwidth, allowing for FMVs to mask or ease loading sequences. This is similar to the fancy loader screens on computers that used tapes to load programs from.