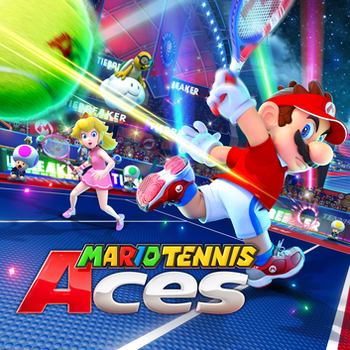 A series of Sports Games by Nintendo and Camelot Software Planning (the two companies also partnered with each other on Mario Golf) starring Mario, Luigi and the rest of the Mushroom Kingdom gang. The game gives you a large selection of characters all from the Mario universe. The first installment is also famous as the First Appearance of Waluigi.

Camelot also developed the tennis portion of Mario Sports Superstars. Another tennis-related Mario game was Mario's Tennis (developed by Nintendo R&D1), released for the Virtual Boy. Mario was the referee in the original 1984 NES and Famicom Tennis game and its Game Boy port.