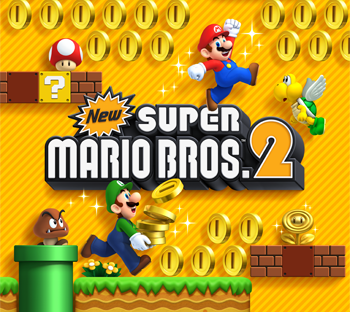 "Grab The Coins!" taken into maximum overdrive.
"And of course, coins, coins, coins. I've seen coins in my sleep."
— TOM 2.0, in his review of Super Mario Sunshine on Toonami.
Advertisement:

, as well as through a registered -- and vague -- domain name/HTML address

as soon as in April in the same year. Later in the same month, Nintendo confirmed the game's actual title, as well as a worldwide near-simultaneous release date for August 2012.

But the big change in this game is the focus on coin collection. Mario is tasked with the optional, non-essential goal of collecting a million coins during his adventure, and new ways to earn money are everywhere, from golden enemies to Gold Fire Flowers that turn whatever the fireballs hit into coins.

The title was released on July 28th, 2012 in Japan (along with the Nintendo 3DS XL) and was released on August 18, 2012 and August 19, 2012 for Europe and North America, respectively. It is notably the first full retail game to become available as a digital download on the Nintendo eShop.