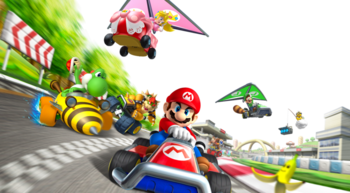 The seventh game in the Mario Kart series, released for the Nintendo 3DS in 2011.

This installment features many assets from Mario Kart Wii, but adds in several new additions to the series. Karts are now capable of driving underwater and are fitted with gliders, allowing them to travel through the air after driving off of a gliding ramp. Many of the returning tracks from previous games have been altered to incorporate these new mechanics. The game also introduces kart customization beyond simply choosing which character and which kart. Karts now have three separate parts: chassis, wheels, and gliders.

Coins return after having been absent from the series since Mario Kart: Super Circuit, making this the first 3D Mario Kart to include them (not counting the Arcade GP games).

If you're looking for tropes for the Game Mod CTGP-7 (which uses this game as a base), here is is.