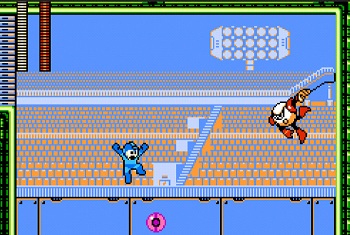 "Our tireless research has resulted in a thrilling discovery! Yes, today we learned that Inklings play basketball! The existence of a new stage, Goby Arena, indicates that Inklings may even play the sport competitively. [...] Furthermore, it appears that the arena is converted into an ink-battle stage during the offseason, and this unique location should make for exciting battles indeed."
— Splatoon 2's Squid Research Lab

The hero steps up to bat. The boss throws the pitch. The hero kicks, TOUCHDOWN! Wait, what's this? The referee is calling on the hero for goal-tending. The hat trick was no good.

An Athletic Arena Level is a sports-themed video game stage.

This isn't simply the arena that you play sports games in. Some games, especially action, adventure, and platforming games, design entire levels around the theme of sports. Expect to see linebackers barreling towards you, pitchers hurling baseballs at you, mooks lobbing tennis balls at you with a mean back-hand, hockey players picking a fight. Everything it takes to keep you from reaching the GOOOOOOOOOOOOOOAAAAAAAAALLL!!

Sometimes a gym or locker room, or even a coliseum might be the setting instead.

In short, expect to see Artistic License – Sports, Gretzky Has the Ball or Calvin Ball as the visual setting. Taking the concept beyond Video Games may result in a Tournament Arc or its bloodier cousins, The Thunderdome and the Gladiator Games.