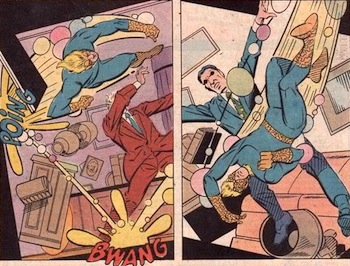 A Bouncing Battler is, quite simply, a character whose primary form of attack is to jump or bounce off everything in sight — walls, floors, ceilings, and especially opponents. While jumping is a common tactic for acrobatic fighters, the Bouncing Battler is distinguished because he typically doesn't have any extraordinary abilities or fighting skills; instead, he relies almost entirely on his mass and momentum to do the work, typically becoming a (figurative) living Hyper-Destructive Bouncing Ball in the process.

Frequently appears as the protagonist in Platform Games, largely due to the enduring influence of Super Mario Bros.. Not to be confused with fighting game females with buoyant bodies.

The Paper Mistake Buzzy Beetle spins around and bounces off the walls.

The Paper Mistake Buzzy Beetle spins around and bounces off the walls.