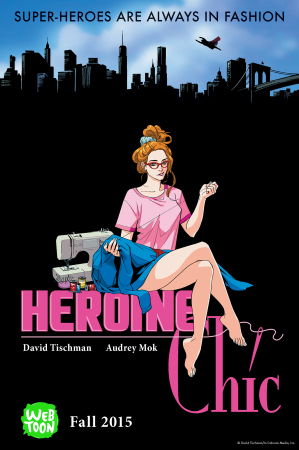 Zoe Porter isn’t a superhero. She doesn’t have super powers. But she is going to be the hero of her own life - and she’s going to do it with style!
Advertisement:

A comic created by author David Tischman and illustrated by Audrey Mok, Heroine Chic tells the story of Zoe Porter, a 24-year old Parsons graduate trying to make it in the superhero fashion industry.

In a New York City where superheroes and villains are a fact of life, there are plenty of businesses devoted to keeping the super-industry churning: insurance, endorsements, and of course, ateliers. After all, someone has to sew all those leotards and capes! Zoe Porter is determined to make her mark in the superhero fashion industry, and she's just scored her dream job working for Dyna Cuff — exclusive designer to the top heroes and heroines of the Big Apple.

But the industry is cutthroat, and Zoe's got to watch her back if she wants to keep her job. She'll have to be wary of her competition, her clients, and even her boss if she wants to make it in the superhero fashion business.

The series was published between 2015 and 2017 on webtoons

, where it remains available for reading. Though it is marked "complete" after 3 seasons, the conclusion of the series leaves several major plot points unresolved and the main character in the middle of what looks like another assassination attempt. At best, it could be considered Left Hanging; at worst, an ending Cut Short.

Some spoilers are unmarked, so proceed with caution.