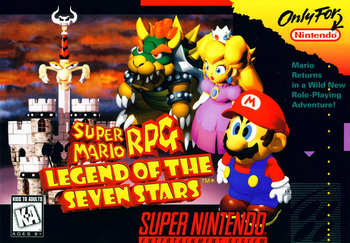 This time, saving the world will be more than hitting the Question Block...
"Listen, Mustache, you and your overgrown turtle-friend can take a hike! Go! Scat! Make like Mario and jump outta here!"
— Snifit 1 (mistaking Mario for an impersonator).
Advertisement:

Super Mario RPG: Legend of the Seven Stars is Exactly What It Says on the Tin: it is the first Eastern RPG to be developed under the Mario banner. It was famously developed by Square and published by Nintendo in 1996 for the SNES.

During a routine princess-saving by Mario, a mechanical menace named Smithy takes over Bowser's Keep. Soon afterwards, a messenger from the stars named Geno (or rather, "♡♪!?") informs us that the blade also shattered the Star Road,note Last seen in Super Mario World as a hidden 8th World. which grants the wishes of everyone in Mario's world. Unless the Star Road can be repaired by finding and re-assembling the seven Star Pieces, no wishes will ever come true again. With the help of his companions (including, for the first time, Bowser), Mario sets off to smash the Smithy Gang and save the world.

The game was one of the first to engage in a full-on Lampshade Hanging frenzy regarding the tropes of both the Mario series and Square's own RPGs. Mario has no speaking role (because he's the silent RPG protagonist), so he has to act out all of his "lines" in mime (including doing an impression of Bowser). This would also be the first Mario game to feature extensive storytelling and characterization, and introduced the concept of Bowser being portrayed as a more complex and potentially sympathetic character. Nintendo would take these themes and run with them, producing a series of pseudo-sequels without Square's involvement, Paper Mario and Mario & Luigi. Nintendo and Square would eventually collaborate again, starting with Mario Hoops 3-on-3 on the Nintendo DS.

Due to licensing problems, very few of the characters that made their debut in this game have recurred in later Mario games, including fan-favorite Geno. Super Mario RPG itself, however, has made consistent reappearances in places where Nintendo collects retro games; the respective Virtual Consoles for both Wii (before the Wii Shop Channel's shutdown) and Wii U have carried the game in all regions, and SMRPG is also among the 21 games included on the SNES Classic Edition, though at present the title remains absent from the Nintendo Switch's game library.

open/close all folders
# to H
I to P
R to Y
"No, you may NOT sleep in the princess's bed! Have you no manners?"
Feedback