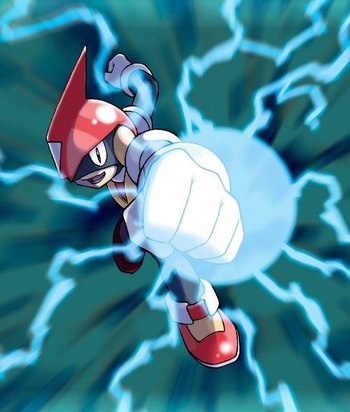 A Platform Game for the Sega Genesis developed by Game Freak and released in 1994. Initially, it wasn't released outside Japan except as a downloadable title (it was briefly available on the North American Sega Channel in the 1990s). However, it was released in North America on the Wii Virtual Console in 2009.

Pulseman was born from the union of Dr. Shakuei Yoshiyama and the "C-Life" (abbreviation of Computer Life) form Dr. Yoshiyama created (specifically, Dr. Yoshiyama created the C-Life form, fell in love with her, and entered the computer world to be with her; their union then resulted in Pulseman). Pulseman is half C-Life, and this means Pulseman can freely travel between the real world and the computer world. This comes in handy when the world is attacked by a mysterious evil organization called the "Galaxy Gang", led by the evil Dr. Waruyama, a megalomaniac who plans to rule the entire galaxy. It's up to Pulseman and his girlfriend, Beatrice (who used to be a member of the Galaxy Gang, but was then rescued by Pulseman) to stand up against the evil intentions of Dr. Waruyama.

It is notable for featuring staff members (such as Ken Sugimori and Junichi Masuda) who would later work on Pokémon.