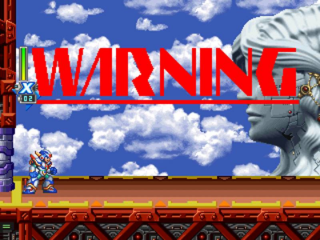 In case the ominous, interlocking double doors you took to get in here weren't enough of a clue.
"WARNING! A HUGE BATTLESHIP 'KING FOSSIL' IS APPROACHING FAST."
— Darius
Advertisement:

In some video games, before you fight a boss, the screen will start flashing red while the word WARNING! flashes up on the screen as the stage music fades out or stops abruptly. Sometimes, it could be a visual warning or an audio warning; it doesn't necessarily have to be both. In any case, this lets the player know that he's about to face off against a more powerful foe.

Often a Most Wonderful Sound, especially if it precedes an awesome boss. Though when it precedes That One Boss, it also means "This Is Gonna Suck."