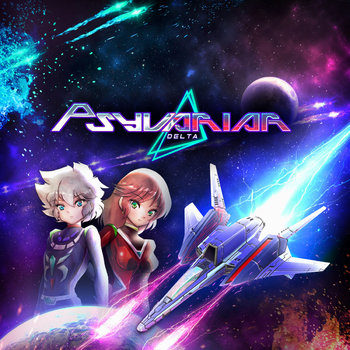 The most recent game in the series.
Advertisement:

Psyvariar is a Bullet Hell Shoot 'em Up game series created by Success for Taito's G-NET arcade hardware and released on March 2000.

In the far-flung future, humanity has been forced out of the solar system. To aid humanity's recovery, scientists created an organic silicon-based AI. Unfortunately, a nearby supernova caused the AI to malfunction and revolt against its creators. Psychic pilots called "Psyvariars" are then trained to destroy the AI and its army once and for all.

One of its main gameplay mechanics is the ability to graze enemy bullets to increase experience. Once enough bullets are grazed, the fighter levels up and becomes temporarily invincible. In addition, rapidly moving the joystick in alternating opposite directions will roll the ship, increasing the fighter's movement speed and graze radius, reducing the size of its hitbox, and concentrating its fire forward for the duration of the roll.

The original version, subtitled Medium Unit, only allowed you to graze bullets once, but in an Arrange Mode subtitled Revision, bullets can be grazed as much as possible

A Compilation Rerelease of both Medium Unit and Revision was released for PlayStation 2 in March 28, 2002 in Japan and September 29, 2003 in Europe, as well as a sequel titled Psyvariar 2: The Will to Fabricate in 2003 before being ported to consoles the following year, and an Updated Re-release of the former titled Psyvariar Delta was released in Jan 30, 2019. Outside of this series, it also gets representation in another Success shoot-em-up, Superlative Night Dreams: Cotton Rock 'n' Roll, in the form of a Moe Anthropomorphism of the Axion-μ ship called "Saiva Ria".