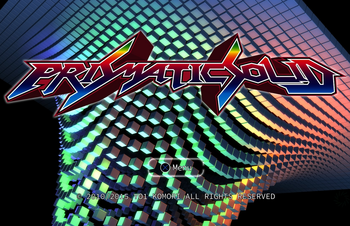 A forced rail shooter with simple and stylish graphic spaces consistent of primitive and solid figures. Numerous amount of particles and tremendous amount of projectiles will thrill you.
— The description of the game
Advertisement:

Prismatic Solid is an indie Shoot 'em Up game for the Xbox 360 by heloli. It was developed by Hayashi Yoichi (under the handle of "YO1 KOMORI"), a former Squaresoft programmer who also worked on Bushido Blade in 1997 and a little-known tube shooter titled iS - internal section (not to be confused with IS: Infinite Stratos) for the original PlayStation back in 1999. Prismatic Solid shares similar aesthetics to iS - internal section as it features copious amounts of Sinister Geometry. The music for the game is also composed by Shinji Hosoe and Ayako Saso, the composers of Bushido Blade and the Ridge Racer series.

In this game, you take control of a green crystalline ship sporting a red, blue, and yellow option that offers your ship six different weapon formations. The gameplay itself is in the old-school style of shoot 'em ups where you must play through the game from start to finish, shoot down anything that isn't you, and collect several power-ups and earn a few extends along the way. Enemies have a tendency to fire extremely dense bullet patterns, but thankfully your ship's options and their tendrils that sprouts from collecting power-ups can shield your ship from harm, adverting some of the game's Fake Difficulty while remaining challenging throughout. You can also earn Stars along the way for performing certain feats, such as fully powering-up your ship or clearing a stage without getting hit.

The was game released under the Indie section of the Xbox LIVE Marketplace on June 3rd, 2010 for the very affordable price of $1. The game's original soundtrack later released during Comiket 78 on the same year. A re-release on the PlayStation 4 is now available.