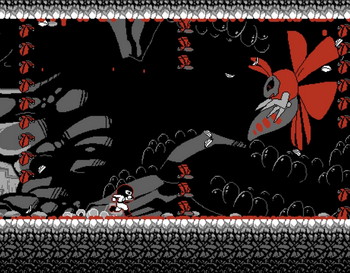 It's kind of like this.
"Happens something which in my town! I will stopping you, monsters. Let's going!"
— Ninja
Advertisement:

Mute Crimson+ is a 2D action platformer available on Steam for Windows, Mac, and Linux. It is the first release from Iced Lizard Games, a two-man operation consisting of Patrick Derosby (programming and design) and Thomas Smith (art and sound). It is a remake of the original Mute Crimson, a title developed by Derosby alone for the Xbox Live Indie Games platform. Like many 2D platformers, Mute Crimson+ has a self-consciously Retraux style reminiscent of The 8-bit Era of Console Video Games - in fact, the game's soundtrack was deliberately designed to be compatible with the NES sound chip. In terms of gameplay, obvious influences include not only Ninja Gaiden (which also features a ninja protagonist, wall-climbing, and double-jumping) but also classic Mega Man (with the emphasis on "tough but fair" obstacle-based platforming challenges) and Super Meat Boy (from which it also borrows the bloody death animations). The most distinctive aspect of the graphical presentation other than the overall Retraux look is the "carefully limited" colour palette: four-tone classic Game Boy-style greyscale with the addition of a fifth colour for contrast: shockingly bright red, which is used for anything that can kill you - enemy or environmental hazard alike. This distinctive colour palette is also called Mute Crimson, thus lending its name to the game itself.

The story is a classic Excuse Plot typical of the 8-bit era - the stoic Ninja is meditating in his hideout in the middle of the peaceful city he calls home, until it is beset by undead and hellish monsters who quickly overpower the police and lay everything to waste. Ninja decides to stop the problem at the source, vowing to take down whomever sent this invasion force in the first place, but he has no idea how deep the rabbit hole goes - through an ancient forest, a vast network of caves, a hidden enemy laboratory, a secret base on the moon, and finally the depths of an eerie hell dimension.

The gameplay is based around Ninja's two primary powers - a fixed-height double-jump and the swing of his katana - and his means of traversing the many obstacles he encounters, primarily climbing up (and down) walls and grabbing hold of overhead monkey bars. There are no powerups or ranged attacks. Each new world introduces a new mechanic which becomes the thematic platforming obstacle for that world - every level is built around figuring out a new way to overcome that obstacle. Usually, these mechanics carry over to future worlds, even as they take a backseat to newly-introduced ones, which gradually increases the complexity and the difficulty of the gameplay. The level design and mechanics are extremely similar to the original Mute Crimson, despite the completely revamped look and sound of the game, although a new, seventh world (the original had six), complete with a new boss, has been added.

The game was submitted for approval on Steam Greenlight in April of 2015, and was formally Greenlit in June. It was released on August 13, 2015, and can be found right here

, along with the soundtrack for the game as a DLC download.