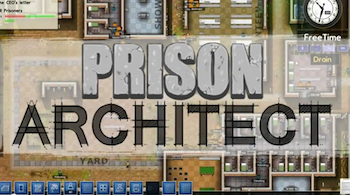 Prison Architect is a management simulator developed by Introversion Software. Inspired by the likes of Dungeon Keeper and Theme Hospital, the idea behind this game is to lay out the plans for the buildings of a profitable and sustainable prison, capable of providing a caring environment for a variable amount of prisoners (or you could just keep them locked in their cells for 23 hours a day), while retaining a stable income from both government grants and manufacturing objects such as license plates. There are also deep investigations on the morality of the different situations you find yourself in, from having to administer the death penalty to a penitent man, to having to shakedown your compound after drugs are found on site, to putting down a prison riot to save your CEO, who it turns out was taking bribes to keep people in prison. Don't worry, they're criminals! They're the bad guys! They deserve filthy cells and long periods of solitary confinement... right?

The game was pre-released as an alpha on Steam in September 2012. The developers encouraged community involvement and released update videos (almost) every month to showcase various new features and improvements. The game was officially released on PC on 6 October 2015. It was then ported to PS4 on June 28th, 2016, Xbox One on July 1st, 2016, Xbox 360 on August 2nd, 2016, iOS and Android on May 25th, 2017, and Nintendo Switch on August 20th, 2018. In early 2019, it was acquired by Paradox Interactive. It is available on Steam here