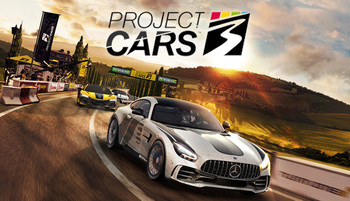 Project CARS (Community Assisted Racing Simulator) is a simulation Racing Game developed by Slightly Mad Studios and published by Bandai Namco Entertainment in May 2015 on PC, Steam, Xbox One, PlayStation 4 (and once planned for Wii U before technical limitations halted it). It is considered the Spiritual Successor to the Need for Speed: Shift sub-series of the Need for Speed video game franchise (consisting of Shift and Shift 2: Unleashed), as they had worked on those two titles for Electronic Arts, mainly borrowing and refining mechanics from the previous two games along with introducing their own. The game also changes the pace in how races are conducted as now there are practice and qualifying sessions in which drivers set the fastest times around the track to get the pole position in the actual races along with a career mode in which the player partakes in races set on the calendar.

The game is well-known to be crowdfunded through a specially made platform called World of Mass Development, or WMD, which is quite similar to Kickstarter, where people can pledge various amounts of money for developing the game, and play each beta build that was progressively released; the more money is pledged, the more benefits one gets in the game. Project CARS started development in 2011, right after the release of Shift 2: Unleashed, with over a hundred builds made available for the pledgers, and was subsequently released in May 2015 (though it was originally meant to be released on 2014). A second installment, Project CARS 2, was released on September 22, 2017 on PS4, Xbox One, and PC. It includes all content seen on the predecessor, but also adds new tracks, new cars, a more in-depth time of day and weather system, improved driving models, and a more solid esports platform. It also introduces a new discipline, rallycross, with corresponding tracks and vehicles. A third game was officially announced on June 4, 2020 and was released on August 28 of the same year, weeks after the same studio published Fast & Furious Crossroads; changes from the second game include a car customization and upgrade system similar to the two Shift games, a revamped career mode and more accessible handling for gamepad users.

Also has nothing to do with project cars; The Alleged Cars that auto enthusiasts buy and restore.

Examples of tropes within Project CARS: