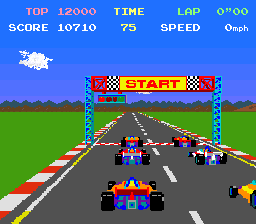 A subcategory of Sports Games. You are on a course or given a course to take and your goal is to get from point A to point B as fast as you can, usually before your opponents do. Sometimes you're just the car, and you never even see the driver, sometimes you drive nothing at all.

Most racing games are Driving Games and when it comes to driving they sit on a line between "arcade" and "simulation". Toward the arcade end, brakes are nearly unnecessary; toward the simulation end, brakes are the only thing saving you from skidding head-on into the wall and cars are as close as can be made to their Real Life analogues. Simulation-style racing games are generally "no contact" affairs, just as in real life. Most games based on real-life motorsport, such as the Formula One series, involve driving around a track with set rules of noninterference with your competitors. Most arcade racers are "full contact" racing, where you are encouraged to shove your opponents into barriers or blast them out of the way with power ups.

If the game has real cars in it, the names and likenesses are licensed from the manufacturer(s). Generally, the terms of the license require that the cars be invulnerable unless the developer is willing to pay a much higher price for the license, as auto manufacturers don't want people to think their cars get damaged easily. This just happens to promote the idea that dangerous driving has no consequences, but hey, at least our car looks good.

A single racing game could become a Massive Multiplayer Crossover involving real-life car manufacturers if their cars are licensed by them. Of course, it's inevitable when it happens.

Of course, the car drivers themselves are even less vulnerable and you rarely see them die in a car crash. Even games where you are not driving cars can still fall neatly into arcade or simulation, though the further they go towards simulation in this case, the less they will play like a driving game.

Expect No Sidepaths, No Exploration, No Freedom, as you're supposed to race the other vehicles, not explore - this makes it much easier for the programmers. This is why when drive-anywhere racing games like Midtown Madness came out in the 1990's it was such a surprise to players.

An inordinate number of racing games feature a Cheating Bastard.

A Super Genre to Mascot Racer.

Common Elements of Racing Games include: