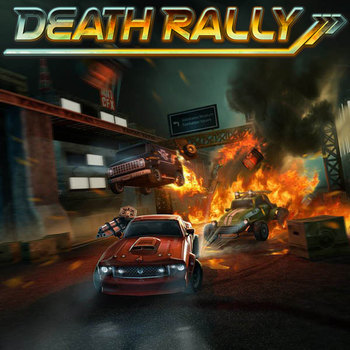 This is not a Sunday drive. This is DEATH RALLY.
"Speeding... reckless driving, illegal racing, and countless other felonies. You've been a busy man. In this state, you're about to suffer some serious jailtime for your crimes. Lucky for you I have some use for a fast bastard. You're going to participate in Death Rally for me. With your help we are going to lure this murderous son-of-a-bitch out of his hiding hole: The Adversary."
— Tex Harris, in the prologue

Death Rally is a Driving Game developed by Finnish studio Remedy Entertainment and released for iOS on March 31, 2011, Android OS on May 2012 and PC via Steam on August 3, 2012.

The game is a reboot of the 1996 game of the same name. The gameplay remains the same: the races use the top-down view, other players' cars can still be gunned down and you win money depending on the place you've finished. There are plenty of differences, though: the Underground market merged with the regular market (so you can buy both upgrades for your car alongside mines and bumpers), there are way much more weapons to choose, several cars completely changed their appearance, there are two new cars (the Interceptor and the Mighty Foot/Bravestar), plenty new roads (while only two or three survived from the original), a behind-the-car chase cam, Achievements and "challenge" events, which enforce certain restrictions such as every racer using the same car or every crate giving one specific item.

The original iOS version also had Duke Nukem and the Mighty Eagle as guest drivers and the aforementioned Mighty Foot as a guest vehicle, as well as a multiplayer mode. The Android and PC versions removed the guests and recolored the 'Foot and rechristened it as the Bravestar while removing the multiplayer module. In turn, the Android version allowed the player to purchase new weapons, cars, tracks and special power-ups with real money, while the PC version features updated graphics, more special races, extra paint jobs for most of the vehicles and additional game mechanics such as the ability to hold Nitro boosts in reserve, Coop Multiplayer and the "Shadow Man".