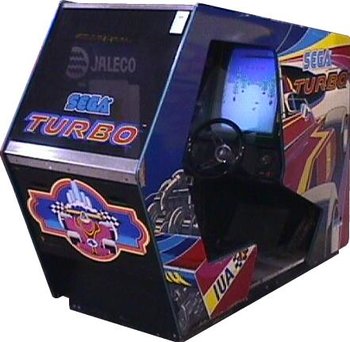 Turbo is a 1981 Arcade Game by Sega. It requires the player to navigate a road race through different urban and rural locations, through differing weather conditions, and during changing times of day.
Advertisement:

It was ported over to the ColecoVision (which was bundled with a steering wheel and gas pedal controller) and the Intellivision. (A prototype version of the game had been developed for the Atari 2600, but it hadn't been released until the 2010s through Atari Age.) It also inspired a licensed board game by Milton Bradley.

Not to be confused with the video game character of the same name from Wreck-It Ralph, although it may have been the inspiration for him.