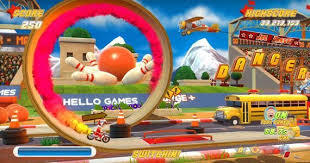 Hello Games logo on the side of the racetrack; long before it became associated with another game quite notorious.
Advertisement:

Joe Danger is a motorcycle-racing game released in 2010 on the Play Station Network by the Guildford, UK-based Hello Games. It was later ported to PC in 2013, and released on Xbox Live Arcade under the title Joe Danger: Special Edition, and on the iOS as Joe Danger: Touch. Lastly, it was ported onto Playstation Vita in 2014.

The title character is a professional motorbike stuntman prepared to make his big comeback and shatter all sorts of world records in the process (that is, if he doesn't shatter all of his bones first). Your job is to help Joe complete a long series of courses by racking up points with tricks off ramps and springboards. In some levels, you'll be asked to hit as many targets as you can, or collect a set of coins within the time limit, while others pit you against Joe's masked rivals, Team Nasty.

A sequel, entitled Joe Danger 2: The Movie, continues after Joe's successful comeback tour and takes him across various themed movie sets, while also giving him skis and a jet pack to use to get around. It was first published on Xbox 360 on September 12th, 2012, then Playstation 3 on October 9th, 2012, then on PC on June 23rd 2013, and finally on Playstation Vita on January 13th, 2015.