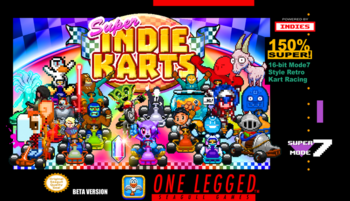 Super Indie Karts is a Mascot Racer developed and published by One Legged Seagull, consisting of multiple characters from various indie video games. It is reminiscent to some other wacky racing games, especially Super Mario Kart due to the tracks being inspired by Mode 7. The game is currently available for Windows and macOS on Steam and Ouya.