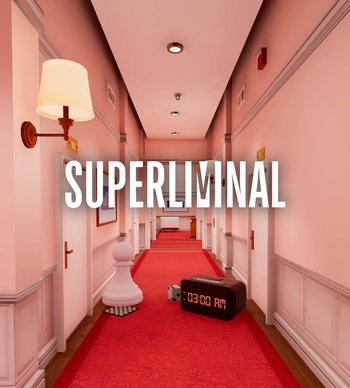 Superliminal is Depth Deception: The Game. A Puzzle Game by Pillow Castle Games, released through the Epic Games digital store on November 12, 2019, then on Steam and GOG.com on November 5, 2020. It is an expansion of a tech demo by Pillow Castle Games titled The Museum of Simulation Technology, adding a plot and utilizing different puzzles while retaining the same main gimmick: the size of any object the player can interact with, from chess pieces to the moon, can be changed by interacting with it and perceiving it differently (specifically, if you grab, say, a block and hold it up to a distant object such that they appear the same size, the block will actually become that size, and large, distant objects can be made small and near in the same manner). A trailer for Superliminal can be found here

, while a full run of the original version of The Museum of Simulation Technology recorded by Pillow Castle themselves can be found here

The plot of Superliminal focuses on an unnamed protagonist learning about dream therapy technology called "SomnaSculpt", capable of helping to deal with problems such as not accurately perceiving the problems of their life. However, something goes wrong during the procedure, and the player must navigate their own mind with the power of enforcing their perceptions onto the environment, hopefully finding a way to wake back up in reality.

On November 5, 2021, the game received a free update titled Group Therapy, a multiplayer mode pitting up to twelve people against each other in randomly generated puzzle environments.