Video Game / Stygian: Reign of the Old Ones 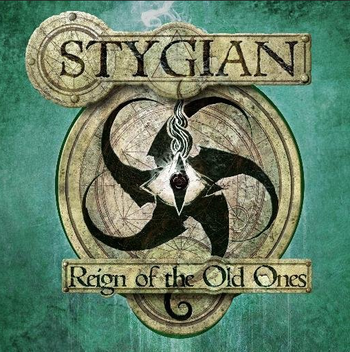 The soul of a scavenger of the seas shall be found inside a bottle of lead,
The last destination of a bodiless starfarer shall be heard from a mouth not of flesh,
A drop of swarming chaos shall be stolen under the ruins once halls of wisdom,
And the book shall be read which should not be read.
Advertisement:

Stygian: Reign of the Old Ones is a horror cRPG based on the Cthulhu Mythos, developed by the Turkish Cultic Games and published by 1C Entertainment. It was funded by a successful Kickstarter campaign on July 1, 2016

, and was released on September 26, 2019 for Windows and Linux PCs on GOG.com and Steam.

The story takes place in the city of Arkham at the height of both Prohibition and The Roaring '20s — in the wake of the Black Day, when the city and all its inhabitants were dragged into a shadowy Otherworld of horrors and madness. Arkham now lies at the mercy of the Great Old Ones and their servants, ruled over by the Mob who controls the drug and liquor trade, the only thing allowing many of the survivors to hold onto a semblance of sanity, and the Cult that worships the Old Ones, sacrificing those who bear their mark to the dread gods in the vain hope of earning their favor.

Show us the way to the book...