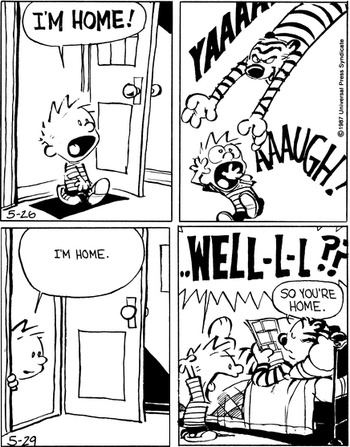 Above: the usual result. Below: the twist.
"[...] As you wait for the inevitable Shyamalan Twist Ending... that never comes. The twist is... there is no twist. The trees did it. Then it ends."
— Honest Trailers on The Happening
Advertisement:

Say you're into a particular author who likes giving each of their stories a special kind of Twist Ending. They like using it so much it's practically a signature element for their works. For some, it's predictable and groanworthy, while others might like it. Either way, it's always going to be there. Right?

Imagine the surprise when, after finishing with the story, the twist isn't there. Much like an Empty Room Psych, the author willingly removes that twist from their latest work to throw avid fans who expected it for a loop.

Maybe they realized that using the trope was becoming predictable or worse, a crutch, and ditched it. Or perhaps they plotted the surprise from the start from before even starting their first work just to give fans a huge surprise. And of course, maybe they just wanted (horror of horrors) to surprise the audience in order to entertain them. It doesn't matter which it is, the net effect is the same: the plot twist for that story becomes the absence of an established twist. So, a Meta Twist.

For a moment, the experienced have become just as easy to surprise as the newbie. In fact, a newbie into the works/genre will be pleasantly surprised regardless. The avid fan will get the added bonus of not knowing what happens next. This can be a good way to keep the audience interested in their future stories.

Compare with The Un-Twist. Not His Sled is a Sub-Trope where the Meta Twist occurs in an Adaptation or a Reboot as opposed to a sequel or an otherwise unrelated franchise by the same creator.note For the latter, beware of potential examples that are Older Than They Think: earlier works lacking expected twists are the Author establishing a style instead of subverting it.

Note: This is a Spoilered Rotten trope, that means that EVERY SINGLE EXAMPLE on this list is a spoiler by default and most of them will be unmarked. This is your last warning, only proceed if you really believe you can handle this list. In fact, these spoilers are even more dangerous than the usual variety, since it's impossible to not spoil the twist ending usually utilized from the moment the name of the work or creator is stated.