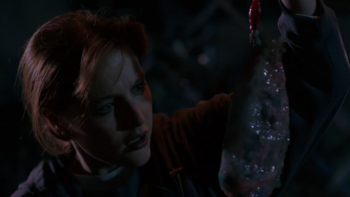 "There's something bigger here, Scully. I'd be willing to bet there are more of these guys out there."
Written by David Duchovny (Story) & Chris Carter (Story & teleplay)
Directed by Nick Marck
Scully: Well, nothing about it makes sense. We've got three deaths of identical victims, no bodies, a virtual non-suspect...
Mulder: Sounds just like an X-File.
Advertisement:

The deaths of several doctors in separate states who are physically identical put Mulder and Scully on the trail of a secret cloning program and an unstoppable, ruthless, shapeshifting Alien Bounty Hunter (Brian Thompson).

"Scully? Are you there? Scully?"