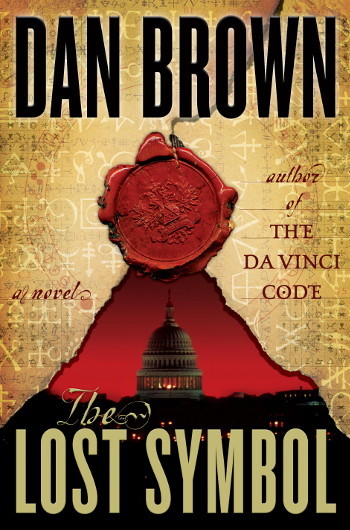 The Lost Symbol, published in 2009 and provisionally known as The Solomon Key, is the third entry in Dan Brown's novel series starring Harvard symbologist Robert Langdon.

This time, the story explores the mysteries of the Freemasons and is set in Washington D.C.. Langdon is invited to D.C. by an old friend and mentor (and also not-so-secretly a top-rung Mason), only to discover that he has been an Unwitting Pawn, manipulated by what seems to be a raving lunatic who kidnapped said mentor and now blackmails Langdon into solving the Freemasons' puzzles for him. The final prize in the game is the fabled treasure of Ancient Mysteries, which, Langdon insists, is immaterial but he doesn't have much choice. As if that wasn't complicated enough, the CIA shows up and demands the very same things of Langdon... except that they couldn't care less about his mentor's safety.

A movie was announced as a sequel to Angels & Demons, but was scrapped in favour of an adaptation of Inferno. In 2020, NBC ordered a pilot adaptation, with a series order following in March 2021, when it was announced that the adaptation would move to Peacock. Brown executive produces the series, alongside Ron Howard and Brian Grazer, director and producer of the live-action films based on Brown's Langdon-centric books. Ashley Zukerman (Rush, Manhattan) stars as Langdon, and the cast also includes Valorie Curry, Sumalee Montano, Rick Gonzalez, Eddie Izzard, and Beau Knapp. It began streaming on September 16, 2021, and its trailer can be seen here

. For tropes about the series, see here.