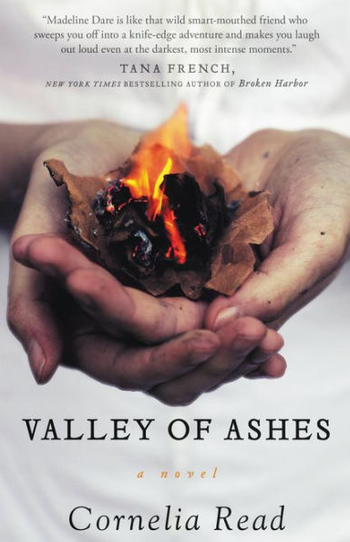 "If you want a visual for me, Madeline Dare, I'm five-five but lie and add an inch on my driver's license. When I was fourteen, old guys in bars started telling me I look like Ingrid Bergman. In daylight among the sober, I'd pass for her hockey-playing cousin, the one who's just a touch too fond of the creamed herring but still has the cheekbones and the narrow hips.

I confided this once to Dean. We were standing against each other, and since he's exactly a foot taller than I am, the top of my head fits perfectly beneath his chin.

'Fuck Ingrid,' he said, insinuating an arm around my waist and peeking down the front of my sweater. 'I vastly prefer a more buxom woman.' In that regard, he will never find this marriage a disappointment."

Madeline Dare is the protagonist of a series of crime/mystery novels written by Cornelia Read.

The series follows Madeline, an ex-debutante from an old-money family, "money so old there's none of it left." As she tries to survive late-80's to mid-90's America alongside her husband Dean, at every corner of America she finds herself in, from Syracuse, Massachusetts, New York City, to Colorado, trouble always seems to follow her as she gets involved in several crimes and investigations. Despite not having any real experience in solving mysteries or fighting crime, the harrowing stories of her ancestry have left a deep enough mark on her soul to make her just as tough and determined as any private investigator around, and allows her to somehow survive tragedy after tragedy in her own unique way.

The series is comprised of the following novels:

The novel series provides examples of the following tropes: