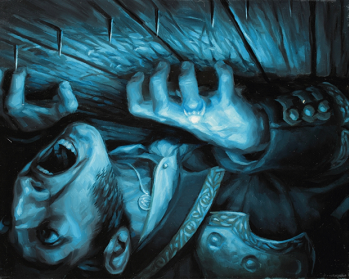 Free room and board... with too much board and not enough room.
"I need space! Above me, and below me, and all around me, and I don't have space all around me, and that's bad, because... [yelling] I'M A SPACE MONKEY!"
— Minka Mark, Littlest Pet Shop (2012)
Advertisement:

Small or enclosed spaces and having no escape. Like bee stings and heights, this is one of those things that unnerve essentially everybody, but, like those two, it also affects some people much more than others. Some people are deathly afraid of enclosed spaces, and anything from being trapped in a stuck elevator to being shut in a closet could cause them to Freak Out and make being Locked in a Room and Locked in a Freezer ever so much more fun for all involved. Studies show that around 1 in 20 people in the world have severe claustrophobia. For fictional characters, the number is more like 1 in 3. Expect visions of small places getting smaller and smaller until there's no place to breathe, and expect anyone who is revealed to be claustrophobic before the fact to be put into a tight situation eventually.

If this is The Hero's debilitating weakness, then it's also an example of Why Did It Have to Be Snakes?, though it is a phobia that can and will occur in any kind of character, since it's so easy to give situations where it would come into play.

The opposite, rarer (in reality and in fiction) phobia - where the character is afraid of wide-open spaces - is called agoraphobia, though that often limits itself to being afraid of the outside world in general, and those suffering it often still feel comfortable remaining inside a firmly locked house.

Truth in Television, of course, as it's a common fear many Tropers reading this may know someone who is claustrophobic or even be claustrophobic. The Other Wiki explains it in depth here.