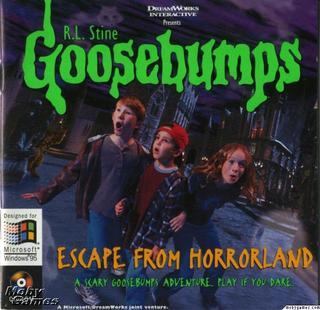 "Ya know, Horrorland may SEEM like a scary, foreboding place... BECAUSE IT IS!!!"
Advertisement:

Escape From Horrorland is a 1996 computer game based on the Goosebumps book One Day at HorrorLand. It was one of the first games made by Dreamworks Interactive.

Set as a sort-of sequel to the book, you are the friend of Lizzie, a bossy young girl who was babysitting her brother, Luke, and his friend, Clay, for the night. Suddenly cosmic forces transport all of you into a bizarre place called Horrorland. You need to rescue Luke and Clay and then escape from Horrorland.

Rather infamous among children of the 1990s for being scary in a variety of ways. It used a combination of 3D graphics, miniature sets, live-action video, and animated puppets to create a pretty impressive setting.

Not to be confused with the 2008 Goosebumps game Horrorland for the Nintendo DS, Wii, and PlayStation 2.

See also Attack of the Mutant, another PC Goosebumps game released in 1997.

Trash cans lead to tunnels below. Beware of what lurks there...red eyes aglow!
The greenery's dense...so are you! Meat treats make sense it you hope to get through!
On the werewolf's neck, there's the hand of a mummy. Trap him! Grab it! Or you're a big dummy.
Boys in stocks got unlocked. Somebody appeared and... oh forget it. Do you think it's easy making everything come out in some cutesy little rhyme? The point is the boys are gone, okay? They're G-O-N-E, gone. Want rhymes? Send a fax to Mother Goose.