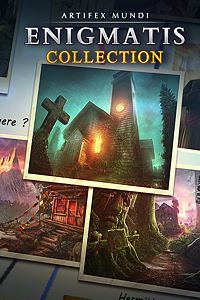 Enigmatis is a trilogy of games developed by Artifex Mundi and published by Avanquest Software; the first in the series released in Europe in 2012. It is available for a variety of platforms including, but not limited to, PC, iPad, iPhone, Kindle Fire, Xbox, and Blackberry. It chronicles the adventures of an unnamed female detective, who deals with supernatural foes, mystery, and death.

The Ghosts of Maple Creek, the first game, centers around a missing persons case in the eponymous Maple Creek. The story opens not with the investigation, but the detective being knocked unconscious and losing her memory halfway through it. She must find the pages that were ripped out of her notebook and piece together the clues she can find in town, as well as uncover the secret behind the townspeople’s strange behavior.

The Mists of Ravenwood, the second game, begins two years after the end of the first, with the detective investigating some leads along the west coast. As she’s driving through the woods, a mysterious creature nearly runs her off the road — straight to an abandoned and torn up camper, outside the gates to Ravenwood Park. She ends up embroiled in another set of strange disappearances, the activities of a bloodthirsty cult, and supernatural phenomenon.

The Shadow of Karkhala, the final game, features the detective and her partner finishing their pursuit of the demonic preacher, searching for an old monastery in the snow-capped mountains of Tibet to stop his bid for world domination.

The gameplay is a mix between point and click games, puzzle solving, and hidden object games.