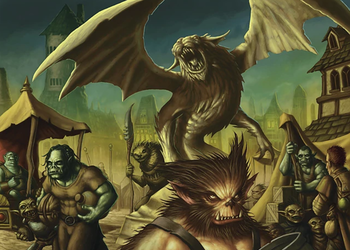 Variety's the spice of life.
Advertisement:

When people think of monsters, it's as solitary creatures or gangs of creeps. If they're part of a greater group it's because The Man Behind the Monsters is using them as part of his schemes, not any normally occurring social impulse. Imagine the surprise characters will have when they discover the Monster Town. Rather than spend all their time eating orphans, these "monsters" have built a settlement and formed a society with its own culture. Usually it's very different from human culture, complete with bizarre and dangerous customs, or amusingly identical. They may be The Fair Folk or a strength based society, or have customs we can't fathom because they communicate through scent.

These monsters may prove to be Not Always Evil, who decided not to be wandering homicidal maniacs, and teach the most naive character that so-called "evil" monsters really aren't so bad. Or they may prove the "always" in Always Chaotic Evil, and instead of pillaging and eating orphans, may spend their time designing war machines and thinking up ways to cook the orphans.

The Monster Town is usually filled with a hearty Monster Mash of Eccentric Townsfolk. While the majority of the population might not like you (maybe because you murdered their less civilized cousins, or because you look like the humans who do murder them), there's usually one or two people who are impressionable or open-minded enough to help you.

If the setting is a Fantasy Kitchen Sink with a Masquerade, expect them all to work together to uphold it and/or plot the downfall of humanity.

Compare Halloweentown, which is likely to overlap with this trope. In a video game, it may or may not also be a Dungeon Town.