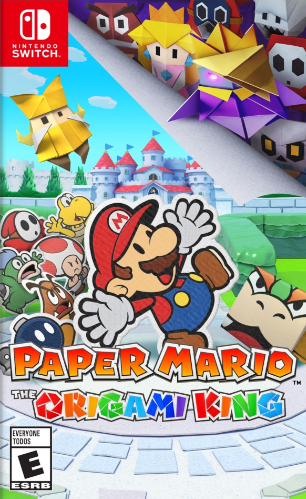 "Will you crease yourself and be reborn, like me?"
"I am no longer your brother Olly. I am KING OLLY! By the time I am done, all of those miserable Toads will be folded... The flimsy paper minions of Bowser shall be reborn as loyal Folded Soldiers—serving me! And I shall fold, crease, and bend the entire paper world to my whim... The birth of a new origami kingdom!"
— Olly
Advertisement:

Paper Mario: The Origami King is the sixth game in the Paper Mario series, developed by Intelligent Systems and published by Nintendo.

Princess Peach is holding an origami festival in Toad Town and has invited the Mario Brothers to join in the fun. But when the brothers arrive in town, they find it abandoned and in disarray. Inside Peach's Castle, Mario discovers Peach has taken on an origami form and wants him to join her in "being folded". Regardless of Mario's answer, she proceeds to drop Mario into the castle dungeons, where he sees Bowser's minions are also being turned into origami.

It turns out that Olly, the titular Origami King, has invaded the Mushroom Kingdom and turned Peach and Bowser's minions into origami figurines beholden to his will. Transporting Peach's castle far away, Olly plans to remake the entire world in his image. Escaping the castle with Olly's benevolent sister Olivia and a folded Bowser, Mario goes forth to save the Mushroom Kingdom from the king and his origami legion — the Folded Soldiers.

You can view the game's first trailer here

Olivia says she hasn't seen any Folded Soldiers in a while. Cue some Folded Koopas popping up.

Olivia says she hasn't seen any Folded Soldiers in a while. Cue some Folded Koopas popping up.