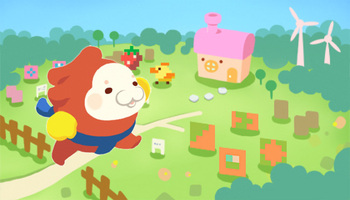 Play the TV Tropes level with this QR code!

◊
Pushmo (also called Pullblox in different regions) is a 2011 puzzle game for the Nintendo 3DS. You play as a little Cartoon Creature akin to a sumo wrestler known as Mallo, who pulls and pushes on blocks to create platforms which he then climbs on to progress through the level.
Advertisement:

A sequel, Crashmo (also known as Fallblox) was released a year later. In this game, rather than manipulating depth, the blocks are affected by gravity and must thus be manipulated in different ways.

The third game, Pushmo World was released to the Wii U in Summer 2014. It's a Mission-Pack Sequel to the original Pushmo that returns to that game's mechanics while adding in new puzzle elements.

Another sequel, Stretchmo (Fullblox) was released in 2015. Like Crashmo, it features a new variation on the game mechanic; this time allowing blocks to be pulled out to the sides instead of just forward and back. Unlike the other games, this one is "free-to-start" (as Nintendo puts it); with everything past the tutorial puzzles sold separately in different bundles. Stretchmo also introduces the option to play as other characters depending on the pack.