Beware the Skull Base 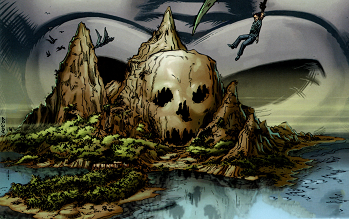 Skull Island? Sounds like a charming place.
Pooh: "Skull?" What sort of place is that?
Owl: Well, from the very sound of it one can tell, it is a most forbidden and far away place!
— Pooh's Grand Adventure
Advertisement:

You need a scary hideout or base for the villain that will look pretty intimidating to visitors. Something that will keep most people away. Or perhaps the location itself needs to be exotic and full of terror, appearing to be a death trap for the unprepared explorer.

As all adventurers discover, beware the skull base, the locale or hideout in which a skull, not necessarily a human one, is heavily tied to the layout or aesthetic of this setting. Though sometimes victim of Camp, these bases evoke a basic death motif and generally come across as lifeless settings where only the most evil of beings reside. The base can be intentionally carved to look like a skull, but it may just coincidentally look like one due to Poorly Lit Pareidolia.

Applicable to any setting, these bases are composed of or contain a crucial component of the layout that could be defined as "skull-like". If the setting does not appear to be skull-like, then this is averted. Can be inverted should the skull base in question be a hideout for good characters as opposed to evil ones. Subverts often consist of deconstructing the purpose of the base, how it functions or even dramatic changes for aesthetic purposes.

Pooh and the gang realize they spent the night in Skull Cave, where Christopher Robin is waiting.

Pooh and the gang realize they spent the night in Skull Cave, where Christopher Robin is waiting.