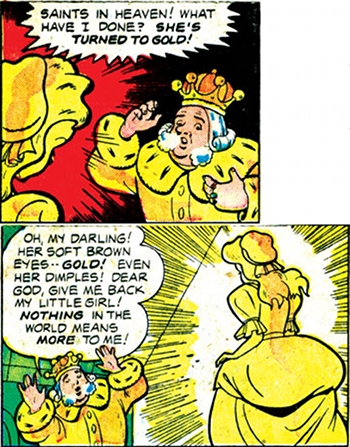 King Midas's daughter appears to pay the ultimate price for her father's lust for gold.
"Once upon a time, in the most lavish of palaces, an enchantress came along and gave some little Joffrey Bieber shithead prince exactly what was coming to him. However, the spell he was placed under also transformed his servants that lived in the castle. Because, you see, the enchantress was kind of a bitch herself."
— Narrator of The Editing Room’s abridged script for Beauty and the Beast
Advertisement:

Sometimes in mythological, religious and fantasy works, somebody does or says something that shows he's in need of an attitude adjustment. Either a being (often a deity or similarly powerful creature) or Fate itself will act overtly to teach this lesson. Unfortunately, the direct victim of this tutelage will often not be the person in need of the lesson, but rather one or more persons close to him, who have not been shown to have done anything wrong. Typical victims of this twisted situation are parents, children, spouses, and colleagues of the culprit, and the suffering often involves their deaths. In light of this, the culprit expresses remorse and either changes his ways or gives way to grief. Either way, he won't be making that mistake again. It is rarely, if ever, mentioned that the entirely innocent suffer the most.

This is quite common in many mythologies, where the gods teach someone a lesson by cursing his entire family — but not necessarily them — or setting up his descendants for misery. Sometimes this is the result of severe Values Dissonance. In comic books and the like, in Stuffed into the Fridge's purest form, female supporting characters die so that male heroes can learn vague lessons about the price of heroism, after which said heroes usually find new love interests and generally get on with their lives. It's also a part of It's a Wonderful Plot stories, as the people around the hero have to suffer in the alternate timeline to persuade him that he needs to return to existence. It's definitely part of The Punishment where the punished usually becomes some kind of monster that hurts innocent people.

This often overlaps with Revenge by Proxy and Misplaced Retribution. Naturally, the Innocent Bystander is an aspect of this trope. Generally a result of Protagonist-Centered Morality. Can be considered a Hard Truth Aesop in its harshness — the culprit is taught that their actions have consequences that affect other people. For cases when the aesop-learner themselves cause the damage, see Kick the Morality Pet. Also compare Special Aesop Victim.