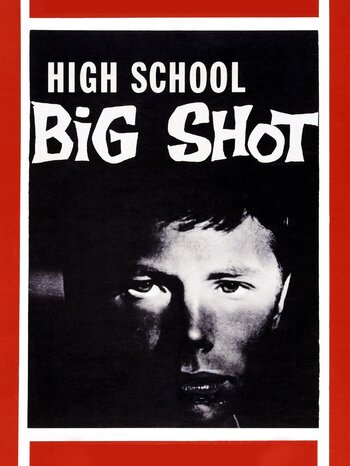 The kid who showed the big time how!
Advertisement:

The story centers around a high school senior named Marvin Grant (Tom Pittman). Although his father's an alcoholic "between jobs" and he has to work as a shipping clerk after school to feed both of them, he's doing well in his classes, and he's on track to get a college scholarship. Of course, jocks like Vince (Howard Veit) bully him for making them look stupid... but Vince's girlfriend Betty (Virginia Aldridge) tells him to back off, and even starts showing interest in Marv. Somehow, the future is starting to look fairly good for Marv, all things considered...

What's that, Betty? You want Marv to write a report on Shakespeare for you so you don't fail English? Sure! What Could Possibly Go Wrong?!

The next thing Marv knows, his teacher scuttles any hope of that scholarship after catching their scheme, Betty "lets him down easily", his dad's lost another job, and the only ray of hope he has is the million dollars of drug money that he accidentally overheard his boss plan to leave in the warehouse safe overnight prior to a deal with The Syndicate. Surely if he had that money, he could take care of his dad, pay his own way to college, and Betty would like him again! And the brother of the neighborhood liquor store owner's a safecracker...

And Marv puts together plans for a Caper. It doesn't work out, as you can guess in movies like this.