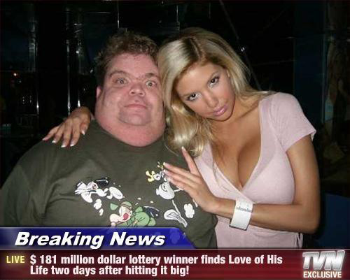 What a coincidence!note The woman is Elena Belle, the guy is probably just a fan.
"She take my money when I'm in need.
Yeah, she's a triflin' friend indeed.
Oh, she's a gold digger way over town
That digs on me."
— Kanye West ft. Jamie Foxx, "Gold Digger"
Advertisement:

This is a character who hooks up with a rich partner (known as a Meal Ticket or Sugar Daddy), specifically to mooch off of said partner's money and status (usually in exchange for sex).

We use "she" because the digger is typically (but not always) female in modern shows, and often much more attractive than her partner. This may also overlap with All Women Are Prudes, resulting in the idea that the only reason women ever have sex is to gain access to a man's money and/or get men to buy them things, while the only reason men even bother to make money in the first place is so that they can have sex with lots of hot women. If this character does enjoy sex for its own sake, she still doesn't necessarily want it from her husband, as it's not unknown for a Gold Digger to marry a man who can provide for her and then to sate her urges on the side with men to whom she's more genuinely attracted.

They usually get Distracted by the Luxury quite easily. Generally stunningly beautiful, to explain her success. Often a blonde whose hair is dyed. Once able to spend his money, she will be conspicuous about it. Expect lots of evening dresses and jewelry. Many a gold digger would be happy to marry a man who is old or in bad health, just so long as he'd be so kind as to leave at least some of his inheritance to his spouse when he dies. If he doesn't seem likely to die any time soon and the Gold Digger isn't also a Black Widow, she may instead seek to screw him over in a divorce settlement.

This is Older Than Steam and a subtrope of Sleeping Their Way to the Top. Compare Rich Suitor, Poor Suitor. See also Trophy Wife, although the two don't always overlap. Sometimes overlaps with Coattail-Riding Relative. There's also a degree of overlap with The Schlub Pub Seduction Deduction, when an unattractive guy is unable to figure out that the hot woman is only coming on to him for ulterior motives. The cardinal sin of the Gold Digger is Greed, though Lust and Gluttony (of the materialistic variety) also figure in.

For the opposite type of character, who definitely does not want the rich beau's money, see Not with Them for the Money. Contrast Marry for Love.

Important Note: A gold digger is almost never a Housewife. While both of them stay home, the gold digger has expensive tastes and refuses to dirty her hands. Children and family are almost never part of her priorities, unless she aims to use The Baby Trap to secure a marriage with (or child support from) her Meal Ticket. The Housewife on the other hand, even though she may live off her husband's paycheck, will concern herself with running the home and raising the kids, money and luxury usually not being in her repertoire other than as byproducts.

For the comic book series, see Gold Digger. For the people who make a living actually digging up gold, see Prospector.