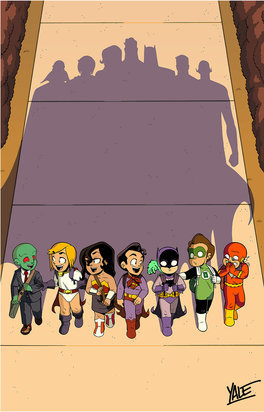 JL8 is a webcomic by Yale Stewart, featured on Tumblr and his DeviantArt page.
Advertisement:

Done in the style of Sunday newspaper comic strip, JL8 follows the exploits of a group of young students who just happen to be kid versions of the Justice League. A brooding, slightly bratty Batman, a mischievous version of The Flash, Superman, and many others deal with the typical pratfalls of school.

It was originally called Little League but due to trademark reasons, the author was forced to change the name of the strip to JL8.

The deviantART page is no longer updated, stopping at Strip #136

there, while the comic continues on Tumblr and Limbero.

in a different browsing format as well.