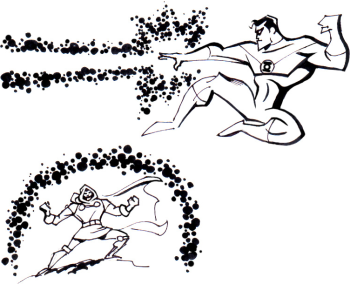 "Right, the war. We've been at war with Apokolips since forever and then some. It's had its ups and downs, frankly. (...) Although, I have to admit it... that time also introduced those strange, glowing black dots upon which our society is built. Would you want to live upon a dotless New Genesis? Right, I didn't think you did..."
— Highfather, Mightygodking's Remix Comic of Death of the New Gods issue #1
Advertisement:

Kirby Dots are a method of showing a crackle of energy such as a lightning bolt or a Battle Aura. They've been widely used in US superhero comics ever since they were first developed by influential artist Jack Kirby in the 1960s. Sometimes referred to as 'Kirby Crackle'.

The technique consists of drawing a series of overlapping dots along the edge of the energy effect in question, forming a fractal-like edge. It is used primarily in print comics, but is sometimes replicated in animation by particularly slavish adaptations.

There now exists a CGI tool

for automatically creating Kirby Dots, and even animating them. Interestingly, an analogous technique called 'particle emission' is used in Video Game graphics for rendering fire, smoke, clouds and, not surprisingly, energy fields. This is, however, mostly because of technical limitations — it's just really hard and computationally intensive to create a polygonal object that changes shape the way fire does. Particle emissions are merely the next best thing.

Not to be confused with a dot named Kirby or the Nerdrock Band Kirby Krackle.