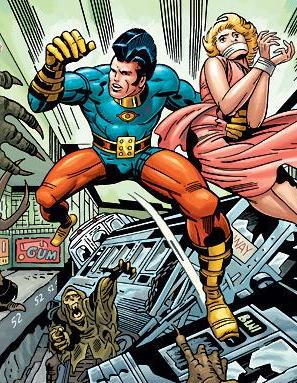 Rush hour can be murder.
"OMAC lives... so that Man may live!"
Advertisement:

O.M.A.C. ("One Man Army Corps") is a DC Comics character, originally a superhero in a futuristic setting, although reinvented a few times since. Created by artist Jack Kirby during his tenure at DC in the 1970s, he first appeared in OMAC #1 (September, 1974). The series only lasted for 8 issues, ending in December, 1975.

The original OMAC was Buddy Blank, a janitor who was chosen by the secret organization called the Global Peace Agency to be their super soldier against the forces of the evil megacorporations that were taking over the world. With the aid of a sentient orbiting satellite called Brother Eye, OMAC tried to prevent a power struggle that would destroy civilization.

In fact, Buddy was the old man who raised Kamandi, The Last Boy On Earth (another Kirby series) several years after the mysterious Great Disaster shattered the world. He died in the first issue, leaving Kamandi to roam alone the strange new world Earth had become.

All of this was before the Crisis on Infinite Earths event changed the history of the DC universe. Afterwards, OMAC was reintroduced in a miniseries by artist John Byrne that was, however, not considered canonical.

Around the time of the Infinite Crisis miniseries, the OMAC concept was reintroduced as an army of humans mutated by nanotechnology and controlled by Brother Eye, which was now supposedly created by Batman to monitor and control metahumans (Observational Metahuman Activity Construct). Except the villainous Maxwell Lord reprogrammed it and used it to attack Earth's heroes instead.

During Countdown to Final Crisis it would be revealed that the actual creator of this Brother Eye was Buddy (who is a scientist now; Batman commissioned it from him.) A subsequent (and poorly explained) chain of events led to the destruction of an Alternate Universe that then became Kamandi's world.

DC's New 52 relaunch introduced a new iteration of OMAC: Kevin Kho, a scientist at Cadmus Industries, found Brother Eye repeatedly transforming him into a hulking monster to serve as its agent on Earth. This series only managed to last eight issues before being cancelled again, and Kevin vanished into Comic Book Limbo for a time. He recently reappeared in the Bad Future of DC's Future's End, a series that also features Brother Eye trying to take over the world once more.

OMAC (the original) also appeared in an episode of Batman: The Brave and the Bold; in this version a clumsy Hero-Worshipper Buddy Blank was regularly transformed into a gung-ho OMAC and back again, with neither side aware of the other's existence.

Not to be confused with One-Man Army, although it was obviously based on the idea.

Tropes shown in OMAC over the years: