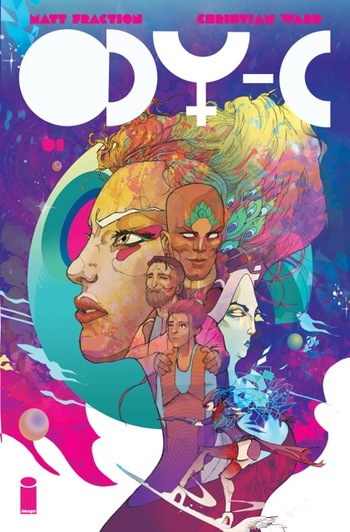 As the title suggests, it's a science fiction take on The Odyssey, telling the story of Odyssia's return home to the planet Ithacaa following the sack of Troiia VII, and the strange planets and alien creatures she and her crew encounter along the way. And as the story continues, it also folds in story elements from other epics, including the Thousand and One Nights and the Aeneid.

Odyssia, by the way, is female. So is her entire crew and pretty much everyone they encounter. The second issue explains that, at some point in the past, Zeus killed off every man in the universe for fear that one of them would father a child who would overthrow Zeus the way Zeus overthrew his/hernote The Olympians don't bother with restrictive mortal concepts like the gender binary. father Cronus. The consequences of Zeus's action, and of various attempts to get around it, recur through the series.