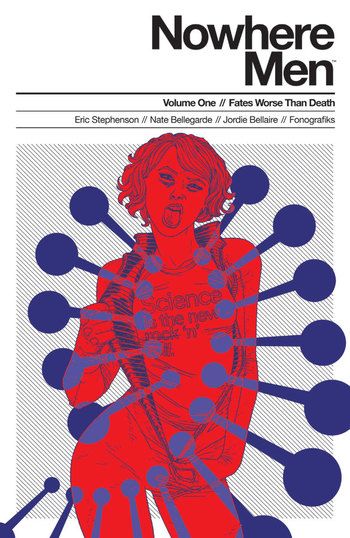 Nowhere Men is an ongoing (2012-present) Image Comics series, written by Eric Stephenson, colored by Jordie Bellaire, and lettered by Fonografiks. Nate Bellegarde did the art from the series launch until issue 6, after which he was replaced by Dave Taylor. The series picked up acclaim upon its launch, with four Eisner Award nominations in 2014 (including one win), but has seen its schedule stagnate since then.

The series follows a quartet of scientists (highly analogous to a certain musical quartet) named Dade Ellis, Emerson Strange, Simon Grimshaw, and Thomas Walker, who live in a universe where science has all the popularity that pop music does in our world. The four, already the most acclaimed in the world, decide to join forces under the name "World Corp" to further their work; however, various forces split the group apart, leaving World Corp a shell of itself, the four friends bitterly divided, and a lot of the company's stranger projects in a precarious, inadequately attended-to state of limbo.