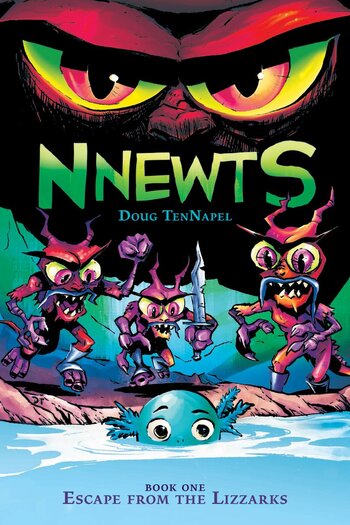 Nnewts (yes, that is the correct spelling) is a fantasy graphic novel trilogy by Doug TenNapel. It takes place in a world divided into two groups: amphibians and reptiles.

Our hero, Herk, is a young Nnewt living in Nnewtown with his family. Herk's father is a magician who rarely has time to be with his family, and Herk was unfortunately born with crippled, shrunken legs that leave him unable to walk, but otherwise, he is happy. But everything changes when the village is suddenly attacked by the Lizzarks, an evil reptile army that decimates the village. Herk is forced to swim for his life, taking him on an adventure in which he makes new friends, learns magic spells, learns dark secrets about his family, and takes on the Lizzark army.

There are three books in the series: