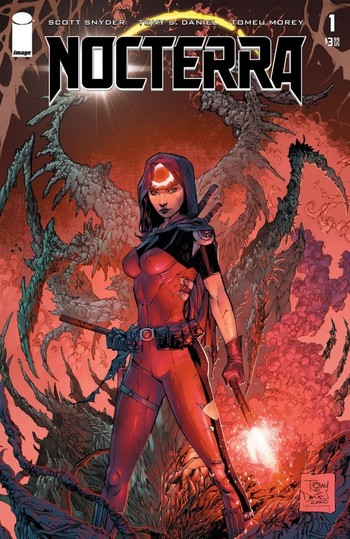 What if tomorrow morning, the sun didn't rise? And the earth was plunged into an everlasting night...a darkness that changed every living unlit thing into a monster?
Advertisement:

Nocterra is a 2021 post-apocalyptic Image comic written by Scott Snyder, with art by Tony S. Daniel and Tomeu Morey.

Thirteen years ago, the sun and stars all vanished from the sky. This was called the "Big PM." Even worse was the realization that any living thing that stayed in darkness for at least ten hours started to change, to transform into something monstrous. They call them "Shades" and human Shades are the worst, attacking anything in their path.

Now, thirteen years after the Big PM, Val Riggs (call sign: Sundog) works as a truck driver, transporting anything the surviving cities need in the dark, deadly roads. All she has left is her truck and her adopted brother, Emory. However, Emory is currently infected by the darkness and will turn into a Shade if Val doesn't find a sunlamp to sufficiently cure him. So she takes a job from an old man and his granddaughter.

It just happens that this old man is being pursued. Because he might be the man who killed the sun.