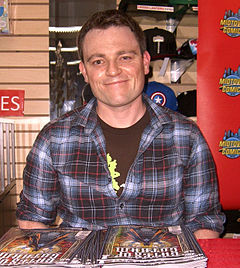 Scott Snyder (born 1976) is a comic book author, best known for his Vertigo Comics indie series American Vampire and his run on Batman. Snyder cut his teeth with his short story Voodoo Heart before doing his first comic work with Marvel in Iron Man: Noir. He eventually joined Vertigo and in collaboration with Stephen King wrote the Eisner Award-winning

American Vampire. He went on to write 11 issues of Detective Comics to critical acclaim.

He wrote the Batman main title for the duration of the New 52 relaunch, including the critically acclaimed arcs Night of the Owls, Death of the Family, Batman: Zero Year, and Batman: Endgame. He also wrote the first 18 issues of the New 52 Swamp Thing, which was similarly acclaimed, and Superman Unchained, one of the most positively received Superman stories of the New 52. In 2017, he returned alongside Greg Capullo to write the quite dark 2017 Crisis Crossover Dark Nights: Metal, and went on to write the Justice League main title that headlined the current DC Universe initiative, which deals with the fallout and consequences of Metal. He, alongside Greg Capullo once more, later wrote the DC Black Label three-issue miniseries Batman: Last Knight on Earth, which serves as an effective "finale" to his Batman run. In 2020, he and Greg Capullo teamed up once again to create Dark Nights: Death Metal, the culmination of his current saga.

He has no family ties to DC films director Zack Snyder, albeit Zack mentions Scott's work as some influence to his films in the DC Extended Universe. Scott mentions this works vice-versa with the scale and tone of his comics invoking Zack's style.