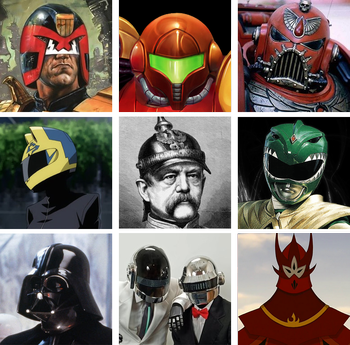 All sizes fit all. note L - R, top to bottom: Judge Dredd, Samus Aran, Blood Angels Mark VII, Celty Sturluson, Otto von Bismarck, Green Ranger, Darth Vader, Daft Punk, Fire Nation Royal Guard.
"Honda was best known for his bad-as-shit samurai helmet, which, aside from generally looking totally fucking awesome, was adorned with gigantic stag's antlers that stuck up out the top of the helm and looked pretty much as badass as deer antlers can possibly look (which, evidently, is more badass than you might think)."
— Badass of the Week, on

Because a helmet can obscure a characters' face or hair, as well as make them look like everybody else wearing helmets in a dangerous environment, it's often said that Helmets Are Hardly Heroic. This trope begs to differ, demonstrating that the identity of a character or group of characters can actually be enhanced if you give them a helmet with a really unique and memorable design. Especially when a character's face-covering helmet serves to conceal their identity, or when a character almost never takes their helmet off in front of other people, it can become more famous and recognized than their actual face, both in-universe and out.

One thing that makes a helmet cool is a crest of almost any shape or size on it. History is full of Cool Helmets, from the Greek Chalcidian helmet worn by Hoplite to the Roman gladiators' ornate helmets to Japanese Kabuto to the German Pickelhaube. These helmets influenced the designs of various other helmets across media.

Of course, many characters who wear a Cool Helmet may not truly need protective headgear, especially in the case of beings of godlike power who barely have to worry about head injuries. A helmet may have some other practical function such as life support, or be worn simply because of vanity. A villain in a Cool Helmet might be a nerd underneath.

Compare Signature Headgear. If a helmet is so crucial to a character's appearance or identity that we never see them not wearing it, compare Never Bareheaded.