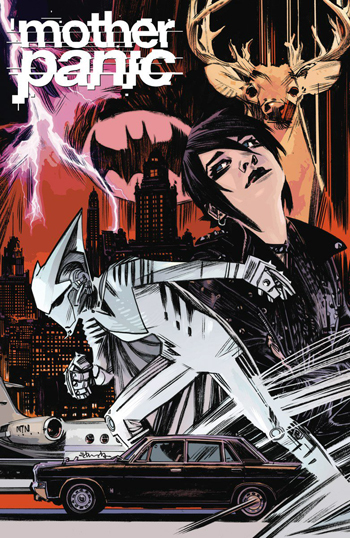 Mother Panic is a 2016 comic book published by DC Comics as part of the first wave of their Young Animal imprint. The title is written by Jody Houser with art by Tommy Lee Edwards, Shawn Crystal, and Jean Paul Leon.

The story focuses on Violet Paige, a young celebutante who returns to Gotham City after a mysterious ten-year absence. Armed with extensive martial arts skills, a technologically-advanced suit, and superhuman strength, Violet takes on the dark underbelly of Gotham's elite, privileged society as the brutal vigilante Mother Panic, seeking revenge for events in her past. In addition, she must figure out her place within Gotham's existing roster of crimefighters, deciding whether she will toe the line or operate according to her own rules, thus putting herself at odds with Batman and his allies.

Although not released under DC's Rebirth banner, the series does still take place in the same continuity, as do all Young Animal titles.

The series began on November 9, 2016. In October 2017, after the release of issue #13, the book went on hiatus until the Milk Wars crossover. While Violet doesn't play a big role in the crossover, the Mother Panic/Batman special has her properly meet Batman.